** Hello to the listeners of the Robert Elms show. Here are my twitterings and whitterings from this week. **


So, first of all, I spoke to Ed Burstell from Liberty who brought us up to speed with the flower power party they're throwing on 25th May. I also wondered out loud why I choose such difficult words to pronounce. It doesn't sound quite the same when you say Flar Par. No matter, if you have been graced with the name of a flower, go along - you've got the chance of winning a classic bike in Liberty print, as well as gift coins from the Liberty mint. We established that should Robert join in the parade claiming his name was Violet, he'd be welcomed with open arms. 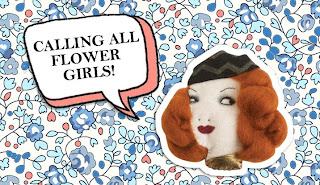 Next, it was the Kerry Taylor auction, also on the 25th May. This is the Spring Fashion and Textile extravaganza which promises a cornucopia of sartorial wares, not least the 1950s-60s Savile Row wardrobe of the actor Richard Todd. For something more startling, I suggested having a look at the wardrobe of Charles Lucas. He's the dapper man who used his inheritance in the Sixties to buy kipper ties and rides in Formula III cars. Kerry Taylor describes his collection as "a riot of stripes, flowers...and velvet. It is one of the grooviest male wardrobes ever to come to auction."
You may have heard me note with some surprise that they also have Queen Victoria’s underwear for sale. Crashing on: there are Edwardian summer gowns for sale, as well as antique bridal wear, beaded flapper gowns, bias cut 30s garden party dresses, 40s suits with angular shoulders, 50s prom gowns, and lots of couture. Have a preview if you like on Sunday 23rd (12-4.30pm) and Monday 24th (9.30-5pm) so that you can whizz down there (Unit C25, 40 Martell Rd, London, SE21 8EN) on Tuesday 25th to buy glamorous things - and Queen Victoria's underwear.
I then burbled on about the all new Brixton Village, which is but three minutes from the tube station and is a creative space bubbling over with ideas. You might know this 1930s market as
Granville Arcade — it has entrances off both Atlantic Road and Coldharbour Lane - so don't get confused. It's in the process of being revitalized by a collective called Space Makers Agency which is filling the 20 empty shops with theatrics and pop-up retail ventures and other such modern ideas. (See how comfortable Robert is with the whole "pop up" idea now?)
Every Saturday there’s something extraordinary (or at least quite interesting) happening there from 11am - 6pm. And here are some of  the shops you'll find:
The Wonderful World of…
Within this space you'll find a lantern-​maker, furniture-​maker, and an ethical fashion designer.
Brixton Cornercopia
As well as stocking locally made food, this corner shop is in the business of collecting food stories from the locals.
Remade in Brixton
The goal is a zero waste community...buy wallets that were windsurfing sails in a former life, or remarkably sturdy belts upcycled from bike tyres. (The free Give and Take stall also sounds like a good idea...)

Leftovers
Run by Margot Waggoner, who trained with Alexander McQueen and Brigitte Campagne, Leftovers sells French antique costumes and vintage fashion from the 1850s to the 1950s. Everything comes from  Paris and New York.
Then it was on to Holly's Houses where Holly-Anne Rolfe designs beautifully personalized stationary. I love stationary and old fashioned writing of cards, so this is right up my street. If you send Holly a picture of your property, she will - for £69 plus p&p - illustrate it, and make it into a rubber stamp. 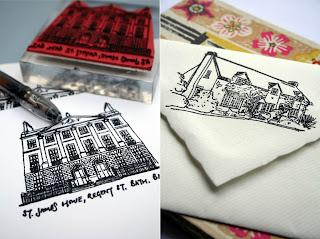 She’ll include address and telephone number etc if you want, too. Very clever.
I then scooted to Unto This Last, where they aim to deliver "local craftsmanship at mass production prices". The name comes from a book written by John Ruskin in 1880 urging just that. 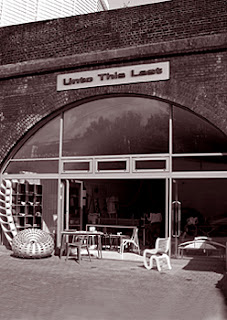 Using innovative digital tools in their small workshops, they niftily cut out the industrial processes and thus the expense. Find them at 230 Brick Lane, London E2 7EB, or in Battersea Park Workshop Queens Circus, SW8 10am-6pm every day.

A speedy peek through the window of the OWL & LION - not a London shop, but they are online and stock great handmade books as well as printed greetings cards, if you're into stationary but don't have the time to stamp your own (btw - make time. It's strangely satisfying.) 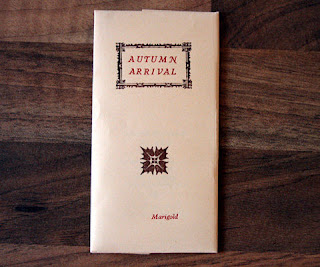 A handmade book for £4 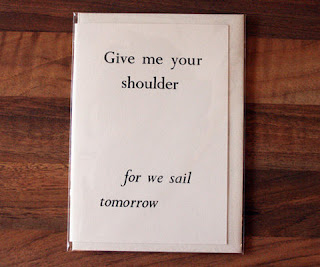 A greetings card for £3. A little more poignant than Hallmark...
And finally, the sample sales.
First, it was Reiss, who are having their up to 70% off sale from 26th - 29th May. It will be in The Music Room, 26 South Molton Lane, from 9am-7pm ,and entry is free.
French Connection are also having a sale from 28th - 30th May. That's in Centro One, which is 39 Camden Street (entrance on Mandela Street). Open from 9.30am - 7.30pm the first day, 10am - 5pm on Saturday, and 10am to 4pm on Sunday. They promise new stock daily. It costs £1 to get in, but the entrance is donated to Children with Lukemia.
Ta da! That's it for now. Leave a comment if there's anything you'd like me to find out for you on the next show. This is a very new blog, so there will be tweaks and shrieks to come. (I'm trying to work out how to make it so that followers can be alerted when I do a new post - I'll keep you informed if I suddenly become super technological.)
Posted by cdh at 09:50